When Does Daylight Saving Time End in 2018? 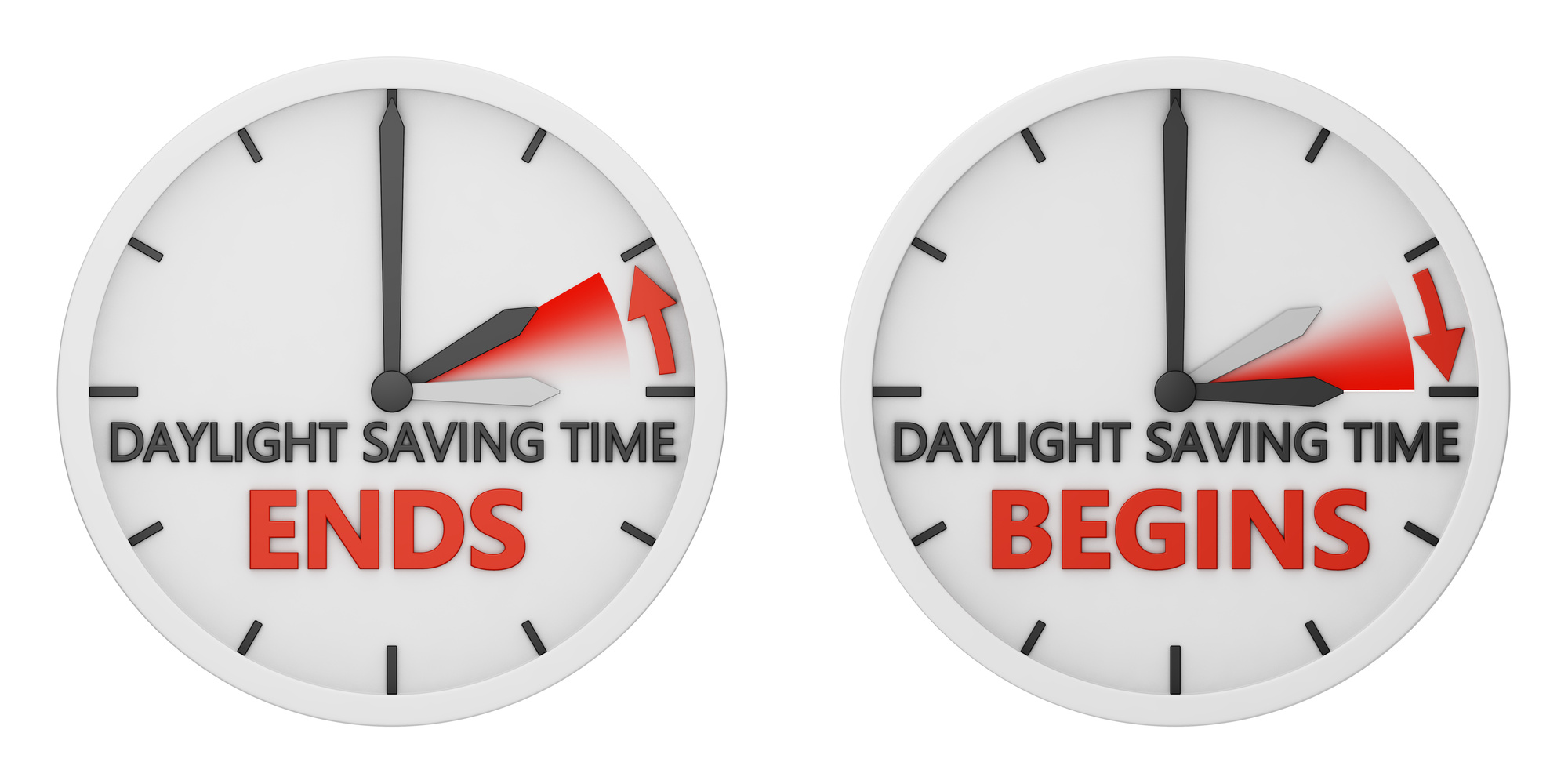 It’s the time of year that anyone who enjoys longer evenings dreads: the end of Daylight Saving Time (DST).

This is the moment on the calendar that many countries across the globe turn back their clocks as the fall creeps closer.

It means darker evenings, earlier in the day.

So when does Daylight Saving Time end in 2018?

Turning Back the Clocks in 2018

First of all, if you need a hand remembering if you fast forward or reverse the clocks in the autumn time, remember this ditty: spring forward, fall behind.

Having sent the clocks forward on 11 March 2018 (where applicable, Daylight Saving Time in the United States starts on the second Sunday of March each year) you will need to revert back again in November.

So precisely when does Daylight Saving Time end?

Where applicable, DST in the United States ends on the first Sunday in November. Standard local time then resumes.

Clocks will go back one hour on Sunday 4 November at 02:00. This means your devices will automatically reverse an hour at the strike of 2:00 a.m., in fact making it 1:00 a.m.

If you have clocks or devices that require manual adjusting, you will need to turn them back an hour yourself.

This means that both the time the sun sets and rises will be an hour earlier on 4 November than 3 November. You’ll notice that it gets darker earlier in the evening and this will continue as the winter draws in.

Why Do They Call it Daylight Saving Time?

DST was first used in 1908 in Canada’s Thunder Bay for longer evenings.

It is called Daylight Saving Time because it, in effect, preserves daylight.

As of 2018, only 40% of the world’s countries actually implement the procedure of moving clocks forward and back twice a year to alter the times of sunsets and sunrises. This affects around 1 billion people a year.

The idea is based on conserving, or “saving” energy. There are debates ongoing as to if it actually achieves this. The fact that 60% of the planet doesn’t use DST suggests not.

The end of DST means, in effect, we are not preserving daylight in the winter months.

DST in the United States

You have asked “When does Daylight Saving Time end?” and we have given you the information. But, does it necessarily apply to you? Are there any areas of the U.S. where this is not applicable?

Thanks to an Act in 2005 (the Energy Policy Act), every individual U.S. state or territory is eligible to opt out of using Daylight Saving Time.

In fact, it neither starts or ends at all, as Hawaii and the external territories do not follow DST.

Where the rest of the U.S. is concerned, Arizona is the only state that does not follow DST.

This isn’t as simple as it might seem though. Within Arizona, the Navajo Nation, which is in the north of Arizona, does use DST. This is because it must keep in sync with areas that fall under its territory that cross into other states. Namely Utah and New Mexico.

So what happens here? When does Daylight Saving Time end in those portions of Arizona?

The areas that use DST in the Navajo Nationrevert back one hour again on the first Sunday in November.

The specific locations this applies to in Arizona are Chinle, Jeddito, Window Rock and Tuba City.

Clocks in the rest of the state use Mountain Standard Time for the entirety of the year.

The last time that Arizona completely used DST was in 1967.

Its history with DST was not a long one though. It only used it after the war in 1918 for six years sporadically, stopping again in 1967.

Florida is currently trying to go DST-free at the moment as well.

An added fact: Indiana used to be another state that had chosen to opt out of the method of Daylight Saving. But in 2006 it synced up with the rest of the United States. It did not observe DST between 1970 and 2006.

In Sync But Not All at Once

Of course, the United States has a variety of time zones. So, when does Daylight Saving Time end in those zones?

It happens on the dates the clocks go back but in a ripple effect throughout the night. It is not simultaneous. This means, across America, there are larger gaps in time difference for tiny portions of the year, in the spring and then again in the fall. This is only the case for a few hours.

The east coast switches its time earlier than the west coast. So the switch takes place three hours later in Los Angeles than it would do in New York City, for example.

Europe doesn’t follow this rule. The switch happens at the same time whatever the local time is in the different countries.

When does Daylight Saving Time end in Europe?

In the UK it is also known as British Summer Time. The alternative time period in the year in the UK is known as Greenwich Mean Time (GMT).

GMT resumes a little earlier than the US. It comes back into use on Sunday 28 October when clocks are reversed by an hour once again.

The Rest of the World

When does Daylight Saving Time end around the rest of the world?

As mentioned earlier, many countries don’t take into account the Daylight Saving method.

Things can, of course, differ year to year.

In 2018, 173 countries will not observe Daylight Saving Time at all. Countries such as China, Peru, Mongolia, Guatemala, Kenya, Iraq, Pakistan, Yemen, Turkey and Thailand fall into this group.

Seventy-six, including the United States, will see at least one location observe Daylight Saving Time.

The U.S. also falls into another group, where eight countries have many of its locations observing Daylight Saving for part of the year.

Sixty-seven countries, including the likes of Iran, will see all of its locations observe Daylight Saving Time for some periods of the year.

Chile remains the one country in which all locations observe Daylight Saving Time all year round.

For the countries that do turn their clocks forward or back, there are also variations on precisely when they do this.

For example, Australia, whose summer happens during the US/European winter, and vice versa, turn their clocks forward on Sunday 7 October and back again on Sunday 1 April.

When Does Daylight Saving Time End on Devices?

The short answer to this is that electronic devices, such as tablets, computers and smartphones, should update automatically. This means you don’t have to do it.

If they are hooked up to the internet, this is 99% likely to be the case. It’s worth a quick check though, just in case. When does Daylight Saving Time end on these devices? They are programmed to change at 2:00 a.m.

Some devices, such as electric alarm clocks or electric wall clocks, may have this facility as well. Even state of the art car clocks or digital watches may do this.

Often though, these kinds of clocks will require you to manually adjust them.

As mentioned earlier, Daylight Saving was first implemented in 1908 in Canada.

It’s thought that Austria and Germany were the first to use DST, eight years later in 1916. This is not accurate.

While it wasn’t Canada in its entirety, several hundred Canadians began using DST on 1 July 1908. This took place in Port Arthur, Ontario, which is known in modern day as Thunder Bay.

Also beating Austria and Germany were other locations in Canada. On 23 April 1914, Regina in Saskatchewan followed the lead of Thunder Bay. Winnipeg and Brandon in Manitoba did it on 24 April 1916 after it was reported that Daylight Saving Time in Regina was so popular that they altered their bylaws to implement it automatically.

Going Global (Thanks to Germany)

The German Empire, and Austria, turned their clocks ahead by 1 hour on 30 April 1916. This occurred two years after World War I had begun. It was implemented in an effort to conserve fuel for warfare by reducing the energy needed for artificial lighting at night.

Catching on to the idea the likes of France and the UK followed suit, for the same reasons. It was only a temporary fix during World War I, however. When the war ended on 11 November 1918, most countries abandoned the idea as it was technically not necessary.

It came back into play during the Second World War, for the same reasons. This time it stuck.

Who is Responsible for Daylight Saving Time?

You might be wondering who is the reason you are even asking “When does Daylight Saving Time end?” This is a multi-layered answer.

The earliest recorded suggestion of the idea came from scientist George Vernon Hudson of New Zealand in 1895.

The professor wrote a pitch and sent it to the Wellington Philosophical Society. He had conducted extensive research into why a 2- hour clock change should take place in October.

He then proposed it should be rewound again in March. This was in line with New Zealand and Australia’s spring and fall, which are the opposite of Europe and the US.

Many backed it, but nothing came of the proposal.

10 years later, completely independent from Hudson’s pitch, a builder from Britain suggested it. William Willett’s idea was somewhat different and far more complicated – possibly why it never caught on.

The idea of eight fiddly 20-minute time changes per year was not appealing. People asking “when does the time change?” 8 times a year seemed a little ridiculous.

The First Daylight Saving Bill of 1909

Willett’s idea, none the less, was looked at by a man named Robert Pearce who was a Member of Parliament.

Pearce drew up a bill and presented it to the House of Commons in early 1908. A year later the first Daylight Saving Bill was written in 1909. It was re-drafted and re-presented several times to a committee, with various issues cropping up. The committee often found problems and the details needed to be ironed out, possibly due to the complexities of Willett’s initial idea.

The agricultural community also got wind of it and opposed it, claiming it would take a toll on their farming in the darker winter.

When the idea was finally embraced during World War I, Willet was dead. He died a year before in 1915.

The US introduced what was then called “Fast Time” in 1918. It can be credited to Pittsburgh industrialist Robert Garland. He had come across the time changes while in the UK. It was used universally in the US.

DST was actually repealed just 7 months later, but certain locations, such as Pittsburgh, Boston, and New York, continued to use it.

It became a mainstay after 1942 when President Franklin D. Roosevelt reintroduced the system, as it had been used during World War I. Now in the Second World War, the president instigated year-round DST in the US. It was called “War Time”.

When Japan surrendered during the August of 1945, the time zones were dubbed “Peace Time.”

Some think that American Benjamin Franklin, one of the Founding Fathers, was behind the idea of Daylight Saving Time.

He pre-dated both Hudson and Willet and voiced the idea in 1784. But there was no clock turning in this plan. And it was only specific to Paris and said as a joke.

He wrote a letter to Journal of Paris’ editor. It was called “An Economical Project for Diminishing the Cost of Light” and offered a solution to Paris’ candle usage issues.

He remarked in the letter that Parisians should essentially get out of bed earlier and not be so lazy.

When Does Daylight Saving Time End? Now You Know!

You came here asking “When does Daylight Saving Time end?” and we have told you.

In fact, we hope you’ve learned more than just that. This page has been here to answer your “When does Daylight Saving Time end in 2018?” questions, but also give you a background to DST and other facts about it.

When does Daylight Saving Time end in other regions of the U.S. and the world? We’ve answered that too.